I have always been fascinated by weather and the discussion of climate change.  I was drawn to the article 11,000 years ago, our ancestors survived abrupt climate change by Ashley Strickland of CNN.  This article was derived from a new study that came from a recent journal from Nature Ecology and Evolution. 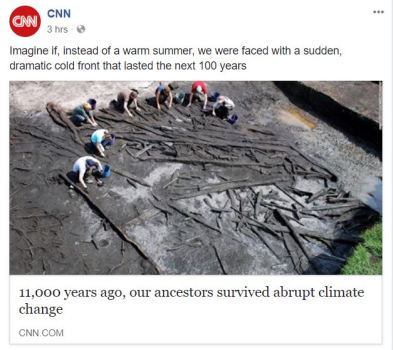 In review of this article, I felt very informed and my curiosity was sparked.  The highlights of the article were how our ancestors survived a century long drop in temperatures, expert opinions, discussion about England archaeological site Star Carr, and comparing climate change from then to now.  My expectation of the commentary in response to the article was in terms of dialogue of theory, preparation for future temperature shifts, scientific discussion, educational interchange, and possible debate.  However, the commentary was almost none of that and more of political arguments, non-scientific banter and varied philosophies which supports that “the public arena is the place that protects and promotes discernment among diverse ideas.”  (Arnett, Harden, & Bell, 2009, p. 103)

Examining the commentary further, I would suggest that the voices that were missing at the time of my review where those of authority on the subject of climate change.  However, within the commentary it was hard to tell if there was anyone that was a specialist in climate change due to the nature of Facebook.  I came to my conclusion that the commentary lacked a climate change authority is due to actual verbiage in comments and the anonymous nature of social platforms.  When an entity or person is an authority on a subject and on a social platform you have a verified account.  This is where you have been through the verification process and received the stamp of approval.  For example on Facebook you will have a blue check mark at the right your name sake.

Diving into the concept of “undue confidence and unsubstantiated opinion” the best examples in relation to the article’s commentary where off topic, attempt at being comedic, political agendas, and opposing views.  Commentary examples; “The abrupt change is going to be when this land is given back and a new American homestead act is made along with reparations”, “Al Gore made millions selling his BS and got a NPP to boot”, “but what percentage of the population survived? Surely not 100%”, and “but the Earth is only 6000 years old, fake news.”  I believe these comments were to shock readers, spearhead debate, anger some, and make people laugh which supports that “we live in a culture in which instant gratification manifests itself in immediate recognition.” (Arnett, Harden, & Bell, 2009, p. 109) 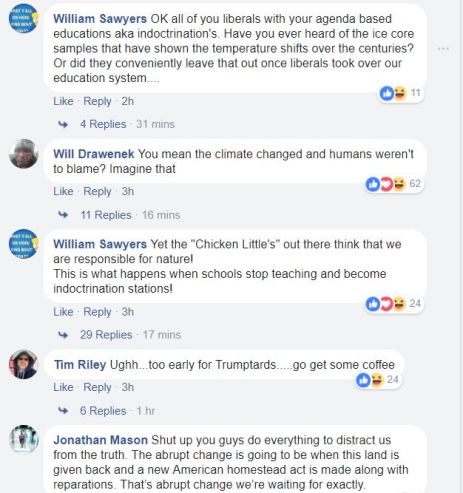 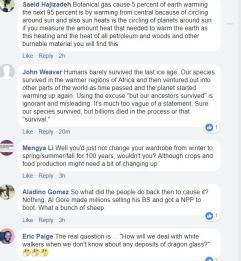 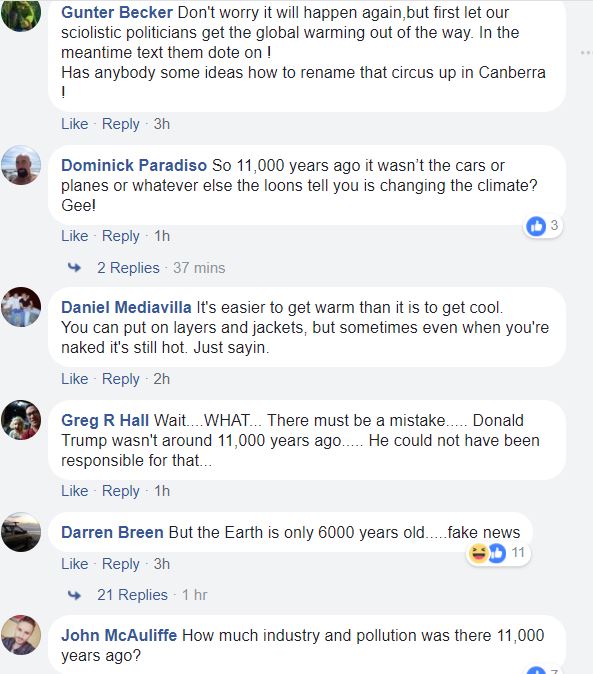 Where is the sacred space?

I believe the social space should be a sacred space that is respected but in general it is not.  The comments for the reviewed article did not influence public arena as a “sacred space.”  The reviewed article was posed on Facebook on March 31, 2018 around 7am at the time of this blog post there were 98 shares, and 511 reactions.  It turned it into an attack on others thoughts and at times a commotion in a fury of comebacks further proves “we somehow seem to think that speaking louder and taking up more space is what we should do when entering the public domain.” (Arnett, Harden, & Bell, 2009, p. 112)  Facebook commentary is known for its heated exchanges, this post generated 27 comments from the opening statement of “Yet the “Chicken Little’s” out there think that we are responsible for nature!  This is what happens when schools stop teaching and become indoctrination stations!”  Then author of the statement attacked other commenters, one specifically by saying “Speaking of meds. You do know that there are some excellent prescriptions for your delusions, RIGHT!?!”

I believe if the article was written and posted under a scientific news source, then a moderator could have provided more of an educational and scientific approach to guiding the discussion.  The article in its current form and posting arena could not have benefited from a moderator because the article was open ended leaving room for theorists, political activists, and non-scientists to implode their agenda. In addition, I believe that the moderator would have been attacked because of the split of opinions of climate change.

In my personal perspective, I do not comment on articles, polls, funny meme’s, and etc. because of the insensitive nature of social platforms.  It has been my experience both personally and professionally that there are too many individuals that hide behind the anonymity of their profile.  Also, I feel like that you can’t convey your message in a typed setting because too often people interrupt the tone of the discussion incorrectly.